Do You Know This “Weed”? 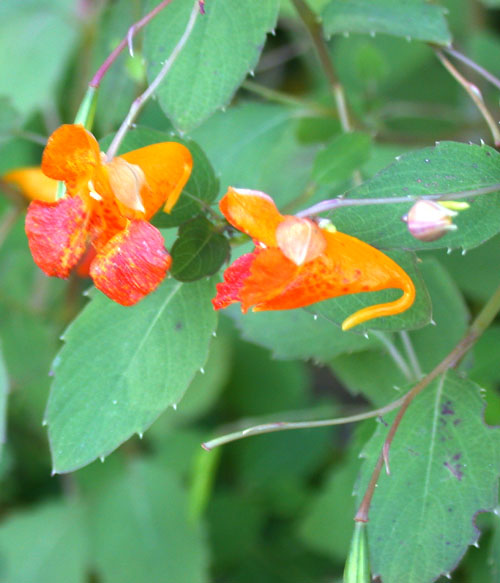 Here’s HerbDoc with a  fascinating use for one of our most common wild plants:

Botanically known as Impatiens aurea, Jewelweed is a member of the genus Impatiens and is widely distributed throughout New England.  It’s actually listed as a wildflower and not a weed per se, and the succulent, annual plants are tall and branching with swollen joints. The stems are somewhat translucent, and the leaves are thin, ovate and spring green in color.  The flowers are slipper shaped and orange, and the plants bloom from July to September.  These plants are often called Touch-me-nots because the ripening seed capsules explode upon the slightest touch, and old-timers say that they will be found in damp, rather fertile soil usually in the same area as poison ivy.

This wildflower is said to contain tannin which makes it very useful for application to the skin.  It’s a wonderful preventive and remedy for poison ivy.  Simply cut the entire plant at ground level and roll it back and forth to release the green juice; then rub the juice over the affected skin.  It is said that if you know you’re going to be working where poison ivy is present and if you apply the Jewelweed first, that it will prevent the rash from occurring.  I can only attest to using Jewelweed after the fact; after a few applications, the rash disappears.  When my children were small, I often boiled several plants, let them steep into a tea and froze the juice into ice cubes.  I found this was useful for treating and cooling the itchy poison ivy rashes.

In addition to being a great medicinal herb, Jewelweed is beloved by hummingbirds and offers them a source of nectar when other flowers have disappeared from the garden.

6 Responses to Do You Know This “Weed”?