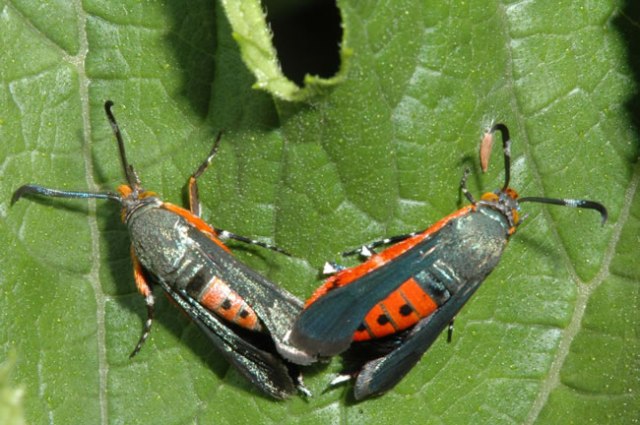 During the last week of June and the first week of July, give or take some days, I know it is time to be vigilant, on the lookout for squash vine borers. These insect pests attack summer and winter squash as well as pumpkins and will destroy your crop. The adult moth is small (about ½ inch long) and looks like a wasp with clear wings and an orange abdomen that has black dots on it. However, unlike other moths, they fly during the day instead of at night, which makes finding them a bit easier. If you don’t see them you may hear them because adults make a buzzing sound when flying that is easy to detect.

Squash vine borer adults emerge from the soil in late June, early July, and soon after they lay their eggs at the base of squash and pumpkin plants. In about one week the eggs hatch and the larvae bore into the stems to feed, blocking the flow of water to the rest of the plant. As a result the plants wilt and that is a sure sign of the infestation. The larvae feed for four to six weeks, then exit the stems and burrow about one to two inches into the soil to pupate. They remain there until the following summer. There is one generation per year.

Last summer I had the borer on my winter squash but fortunately the fruit was already developed enough that I was able to harvest some, although it was half normal size. However, I was determined not to have that experience again.

There are several things that are recommended to control these pests. One is to use an insecticide. Well, that is never my first choice for insect control but to be effective you have to identify the adult or kill the larvae before they bore into the stems. I don’t recommend sitting in the veggie garden for two weeks keeping watch. But what you can do is to use yellow trap pans (e.g. pan, pail, bowl) filled with water to detect the adults because they are attracted to yellow. They fly to the container and are trapped when they fall into the water. Place traps by late June, checking them at least once a day. If you find squash vine borer adults in your traps you know they are active and it is time to take further action.

Another method is to use floating row covers. This is easy enough and relatively inexpensive. Cover the plants when they start to vine (or when you start to see adult borers in the garden). The tricky thing is this: the plants should not be covered when they are flowering because it prevents the bees from pollinating the flowers.

After considering the options and trying the row covers I decided there are two simple and “green” solutions. Plant cucumbers and melons since they are not likely to be attacked by the borer. (Some folks include butternut squash on that list but mine were attacked.) Plant your zucchinis, pumpkins, and winter squash in early July so it matures after adult borers have finished laying their eggs. For me, this last choice is the best choice. You can’t change nature, but you sure can live in harmony without being destructive, even to pests.

It was a pleasant surprise when a dozen or so lightning bugs appeared in my darkened backyard a few weeks ago.  These little beetles bring back happy memories of childhood when my brother and I would venture into the summer night to catch several in a Mason jar.  Then we’d climb to the attic where the beetles would put on their light show for an hour or two before release.

For years now there seemed to be a decline in these and other beneficial insects.  In my opinion the rampant use of household insecticides on lawns and gardens has drastically reduced their numbers so I see it as good news that they are trying to return if only in my neighborhood.

Lightning bugs, members of the family Lampyridae, love moisture and high humidity.  Their blinking, intermittent signals are a kind of Morse code to find potential mates.  My visitors have varying patterns from one to four flashes.  After mating, females deposit their eggs in the ground where the larvae develop to adulthood.  The larvae are ravenous and eat slugs and worms.  They have been observed following snail trails to their next meal!

Adults are thought to feed on nectar.