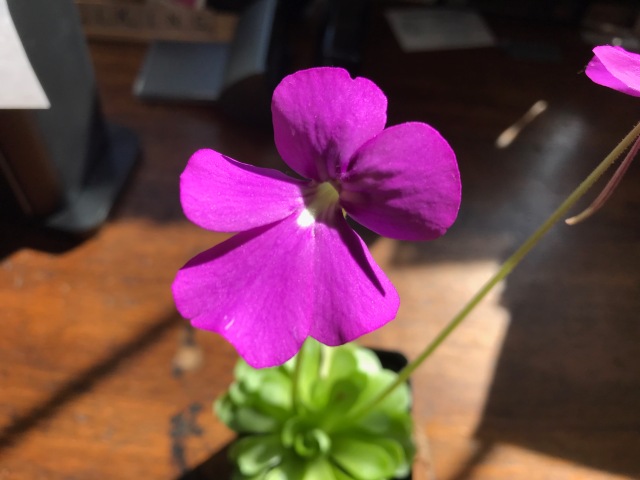 I bought this plant yesterday from an orchid-grower who was speaking at my club. I have no idea why he was selling these in addition to the orchids, but I thought it was a cool plant. It is a Pinguicula, commonly known as Butterwort. (The name alone was enough to hook me.)

The more I learned about butterworts, the more interested I became. The best part is, this is a carnivorous plant that will capture and slowly devour fungus gnats, those nasty little flying pests that plague indoor gardeners.

No one could tell me which cultivar my plant is, (which I always find annoying) but after doing some research, I’m pretty sure it’s a tropical butterwort, that unlike the temperate species, will not go dormant. Native to Haiti, Central America, Cuba and southern Florida, tropical butterworts produce a sticky substance on their leaves that traps insects, which are then slowly digested. They are said to be particularly fond of gnats. 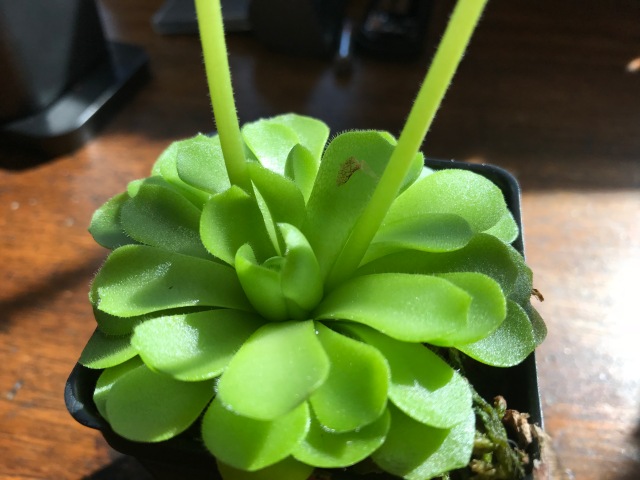 Like other carnivorous plants, butterwort grows in a relatively nutrient-free medium, hence its need for supplemental nutrition from insects. No potting soil or fertilizer required – in fact, those will kill the plant. Mine came potted in Sphagnum moss which, I understand, should be kept moist.

I like this plant’s almost cartoonish appearance, and I can’t wait for it to start eating.