Life and Death in the Garden

I have lots of orioles this year – Baltimore and Orchard. I noticed this poor fellow yesterday, doing what sick or injured birds do – hunkering down and puffing up. His feathers looked a little worse for wear, too. Not a good sign. 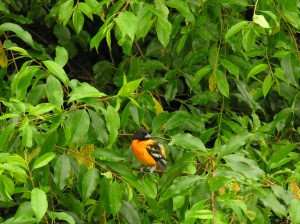 not feeling so hot

Then he turned his head, and I saw what looked like an injury. Had he been attacked by another bird? He was still sitting in that tree the last time I looked – a small spot of orange in the dusk. I felt sort of weird closing the door and going back to my book while just outside another being was suffering.  Another life may have ended last night. I don’t know what happened to him but there was no sign of him this morning. I guess it is always possible  he recovered and flew away.

Meanwhile, another drama is playing out in my vegetable garden – at least it’s dramatic to me. For the first time EVER, I have my very own groundhog. And what a groundhog it is! From my kitchen window, it looks to be about the size of my dachshund, and she’s a standard, not a mini. I have three raised beds, all fenced, but notice the effect the fencing is having – NOT. 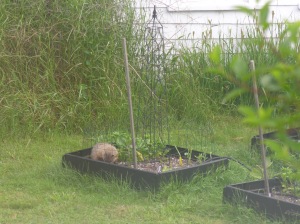 nothing better than fresh lettuce in the rain!

Lettuce – gone. Beans – gone. Tomatoes – nibbled. The only things it does not eat are spinach, eggplant and beets.

Normally, I would put up a bigger, sturdier fence, but since we’re moving soon, I really don’t see the point. Maybe what we need around here is a Great Horned Owl.

1 Response to Life and Death in the Garden