Posted on September 2, 2009 by dirtynailz 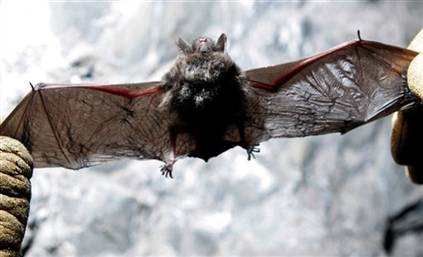 Have you noticed fewer – or  no – bats in your area this summer?  I’ve been hearing and reading a lot about bats lately, and the news is horrendous. Bats by the hundreds of thousands are being wiped out by something called “white nose fungus,” so named because it appears as fuzzy white patches on the bats’ faces and skins.

These Geomyces fungi  live in cold places, and attack bats in the caves where they gather to hibernate in the winter. Scientists still don’t know if the fungus is solely responsible for killing the bats, or if environmental factors are contributing to the problem, but they have found that infected bats wake up more often, burning up their fat reserves and starving to death.

It seems the fungus was first noticed in a cave in upstate New York. It has now spread as far as Indiana, and biologists are warning that it could soon infect bats nationwide, including some endangered populations.

Testifying before two Congressional subcommittees last June, experts said that so far between 500,000 and 1 million bats have died, but that this could be just the beginning of an ecological disaster, and what they called “the most serious threat to wildlife in a century.”

Like most gardeners, I know that bats are vital to the ecosystem. Between April and October, they eat their body weight in insects every night.  So, the loss of 500,000 bats means that 2.4 million pounds of bugs are not being eaten!  Bats in other parts of the country are important pollinators, too.

In an effort to keep the fungus from spreading further, the National Forest Service closed  caves this summer from Minnesota to Maine. Other caves and mines across the country will be closed as well. This might not be the answer to stopping the fungus, but officials are worried that cavers might be spreading it unintentionally. In the meantime, scientists are working on understanding the fungus and finding a way to stop it. 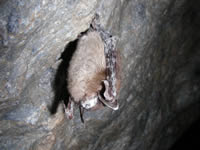 An infected bat at the Greeley Mine, Vermont

Of course, this research effort costs money. Estimates put the cost at about $11 million, and so far, the Senate Appropriations Committee has allocated a paltry $500,000. I don’t know about you, but I think this is tragic…just tragic.