The Worms That Eat Rhode Island 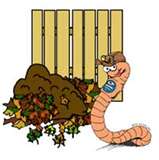 Most of us pay little attention to earthworms, those productive and beneficial animals that play a unique and important role in conditioning the soil. Unfortunately, even though earthworms generally go unnoticed and are not viewed as garden pests they are still being destroyed by the widespread use of chemical pesticides. The consequent reduction in numbers of earthworms is significant because it can have a serious detrimental effect on soil properties.

Earthworm fecal matter, or casts, provides important chemical and structural benefits to soil. The casts enhance soil structure because large particles that are eaten by the worms become smaller granules that enhance the soil chemically by provide nitrogen in a useable form for other organisms. It is interesting to note that by studying the organic matter of earthworm casts scientists have discovered a simple way to determine soil health in agricultural fields.

fall when the soil has more moisture. So, think of your compost pile…think about vermicomposting. If you keep the compost moist, as you should, you will see dozens and dozens of earthworms in there doing their thing. That’s why good compost is so loose and so rich in nutrients.

If you don’t see earthworms around your garden think about whether you have been using pesticides. Reducing your pesticide use allows earthworms to thrive and this makes the soil fertile so you can reduce your use of nitrogen fertilizers and thereby protect the Earth’s ozone layer. Wow!