Rosemary is for Remembrance

In the third of her series of posts about common herbs, HerbDoc has some thoughts on one of the most popular – rosemary:

One of my favorite herbs, rosemary, is still doing well outdoors even though temperatures have dipped as low as 12 degrees here in RI.  Most herbals note that upright rosemary, Rosmarinus officinalis, cannot survive temperatures below 27 degrees so I can only speculate that the ones that make it through the winter either have adequate protection or are drawing on the escaping heat from my home. 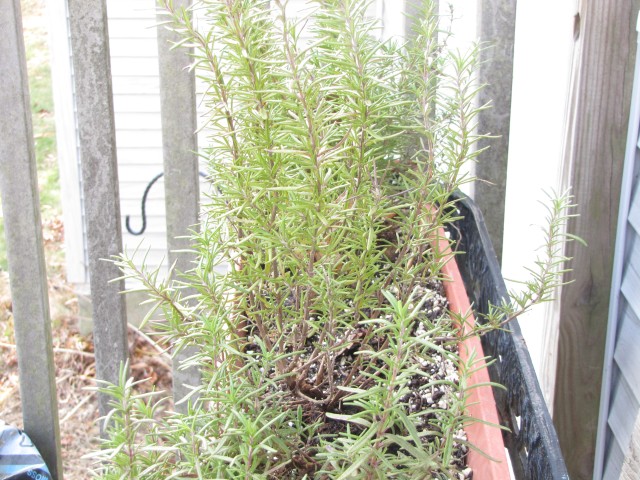 Rosemary is a symbol of remembrance and fidelity.  It was often placed in bridal bouquets and given to wedding guests as a reminder of constancy and devotion.  It was also strewn on graves in the promise that the deceased’s good works would not be forgotten.

As a medicinal it was said to cure nervous ailments and to restore youth to those who merely smelled its aroma.  Hungary water, a concoction of alcohol (“Melasses spirit”, perhaps dark rum) and rosemary tops were heated and distilled to produce a rubbing ointment for lame joints.  According to legend an old hermit made this medicinal to cure Queen Elizabeth of Hungary of paralysis.

In today’s kitchen, rosemary is indispensable for flavoring soups, stews and meats.  Although it can be used in dried form, cuttings of fresh growth can be laid on roasts to add a wonderful flavor.

One caution:  Although many stores and shops sell fresh plants at this time of year, rosemary is usually not fond of the temperature and lack of humidity in today’s homes.  Rosemary hates to be dehydrated so the ones that are lucky enough to make it to the springtime in my house are grown in a cool basement room at a window.  Here they receive adequate light and a weekly watering and misting of their needle-like leaves.

4 Responses to Rosemary is for Remembrance