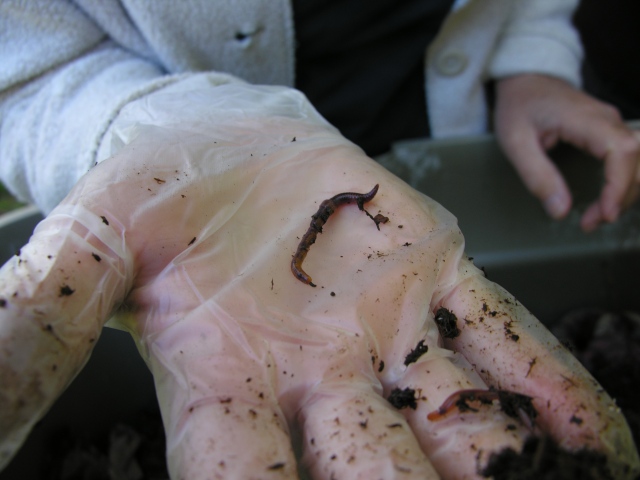 One of my worm friends

For those of you who didn’t know, worm composting- aka vermicomposting – is hot, hot hot! Fearless trend-setter that I am, I took the plunge about three months ago and bought a worm bin and a bag of red wigglers. These Eisenia fetida are the worms of choice, because they do well in bins and consume vast quantities of rotting produce.

The bin came with some coir for the bottom, and several rotting apples and leaves, courtesy of The Worm Ladies of Charlestown, RI. These women are deep-end “wormophiles” who think the world (or at least Rhode Island) would be a far better place if people composted their vegetable scraps instead of throwing them away. I agree.

So I came home with my new friends and even gathered up some fallen maple leaves and put them in a bag, so I’d have some over the winter. I started adding veggie scraps to the bin, and I gave them other things the Worm Ladies suggested, such as dryer lint, and – this is my favorite – shredded credit card offers!

At first, my bin resided in our guest room, and yes, I was prepared to move it out of there if we had guests. The worms seemed content. Apparently if they’re not, they try to escape, and mine weren’t doing that. I could also see the tiny white threads that are red wiggler babies. So they were reproducing. This was exciting! (Cut to shot of husband rolling eyes.)

Then we started getting fruit flies. Every time I would lift the lid of the bin, clouds of them would come out. They took up residence in every room of the house, and all this happened, of course, just before I was to give a dinner party for 14 people. I moved the worms down to the basement, and began a week-long campaign of fruit fly eradication, which consisted mainly of me running around flailing at them with a dish towel. Finally, the flies went away – where, I don’t know or care.

I left the worms in the basement and continued to keep them supplied with produce remnants. A couple of weeks ago, however, I had a feeling things weren’t too happy in wormland. I know they are “just worms,” but I still feel responsible for their welfare, so I brought the bin back to the Worm Ladies for a check-up. To my great relief, everything was fine – a little on the wet side, but fine. There were lots of plump adults and babies at different stages of development. I was astonished to see that the banana peels I had put in there about a week before had vanished! They really seem to like those. Cabbage – not so much.

Soon I will be harvesting my first worm castings – the big payoff for vermicomposting. They make the best darned fertilizer ever. I’ll keep you posted on my continuing adventure.

9 Responses to Adventures With Worms