Throughout my Master Gardener  training, and later, in a more focused advanced course on weeds and invasives, the mantra of every instructor was “seek and destroy.” I don’t know how much money is spent by state and federal governments on programs aimed at eradicating species considered to be invasive, but I am sure it’s a lot. Is it effective? Not really, especially when some local nurseries continue to sell some of the plants we are trying so hard to get rid of.

Throughout all the training, in the back of my mind, there was always this nagging thought: we know that  invasive species crowd out the natives and that some, like oriental bittersweet and kudzu, are particularly noxious and destructive. These thugs were introduced to North America by humans, but so were sparrows and house finches and even honey bees. Isn’t  having to adapt to these new arrivals  part of a much bigger process called evolution?

One scientist is looking at invasives in an interesting way. Tomas Carlo, an assistant professor of biology at Penn State, has published a fascinating paper entitled: “Invasive Plants Can Create Positive Ecological Change.” Dr. Carlo and a graduate student looked at whether Lonicera, or honeysuckle, an established invasive fruiting tree, had affected the surrounding ecosystem in a positive or negative way.

Carlo explains: “We wondered: Are we sometimes doing more harm than good when we eradicate plants that, despite being introduced recently, have formed positive relationships with native animals?” “The fundamental goal is to return a natural area to its original, pristine state, with the native species occupying the dominant position in the community. But the problem is that most native communities already have been changed beyond recognition by humans, and many native species are now rare.” 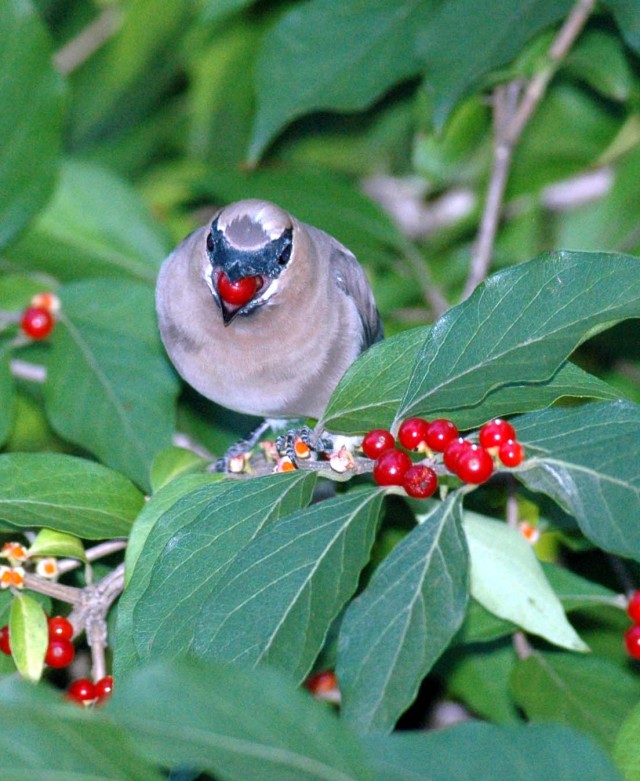 “The abundance of fruit-eating birds in the Happy Valley region is linked to the abundance of honeysuckle,” Carlo explained. “Honeysuckle comprises more than half of all the fruits available in the landscape, and it benefits birds by providing them with a source of food in the fall. Meanwhile, birds benefit honeysuckle by dispersing the plant’s seeds across a wider geographical area, helping the species to occupy more and more territory in areas already affected by human activities.” Carlo takes it one step further, warning that eliminating honeysuckle from the area would also remove an important food source for migrating birds – in other words, do much more harm than good.

Note: All quotes and photos in this blog have been used with written permission from Dr. Carlo.