The Francis C. Carter Memorial Preserve, owned and managed by The Nature Conservancy, is one of the largest preserves in the state. I have hiked this 1,100-acre property endless times, from both trail heads, and it feels different every time.

Today, we took a small wooded trail that opens onto a power line.

We walked along the power line until we came to a sign saying the land beyond was private.  From 1964 to 1980, United Nuclear operated a nuclear facility on 12 acres of this property. The plant was the site of a fatal accident in 1964, in which an employee, Robert Peabody, was exposed to a lethal dose of radiation. The clean-up of the site was not completed until 2011, and the land was added to the preserve.

In several areas near the grassland, the forest has been cut to create scrubland habitat, which is valuable to many bird species as well as the New England Cottontail rabbit.

The grassland is pretty, and, judging by the hoof prints, popular with horseback riders. You can walk around the perimeter on a mowed grassy trail.

I paused to take in some of the trees, which looked so pretty against the dark blue sky.

These trembling aspens were also interesting with their straight, smooth vertical trunks. 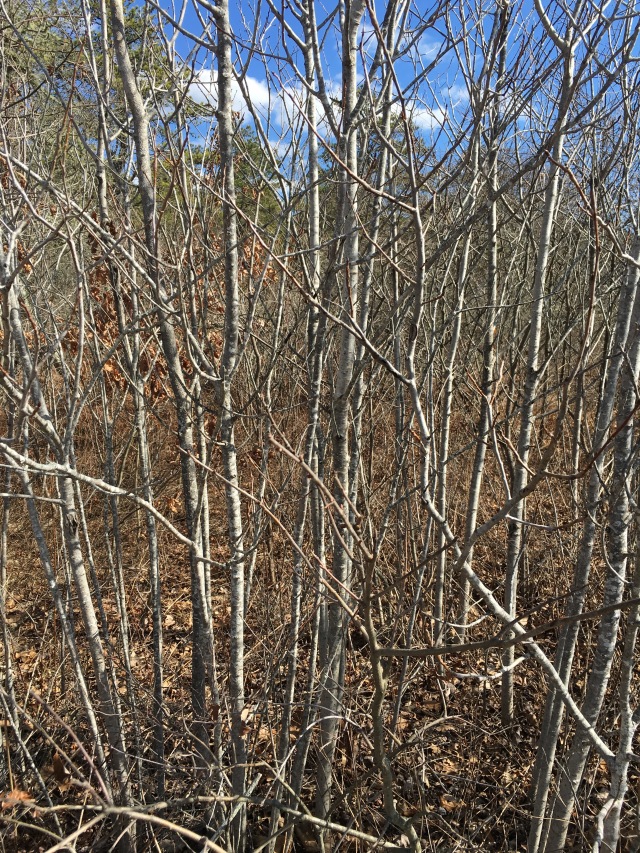 On the way back, Fidgit found a pool and waded in. Hedonist.