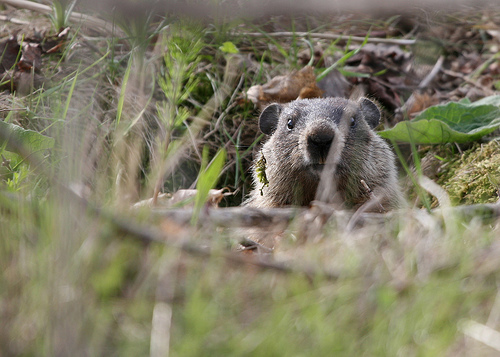 I remember during my Master Gardener core training course, when the mere mention of groundhogs, (or “woodchucks” here in RI) would send my classmates into a frenzied discussion of how to get rid of them. I heard people who I had previously considered to be civilized talking about shooting and trapping and drowning and other “control” methods, all of which appeared to be not only cruel but ineffective, since they kept having problems with the animals year after year. How can you trap a wild animal and deliberately drown it just because it’s an inconvenience? Doesn’t that bother you just a wee bit?

I have had groundhog predation in my vegetable garden, and yes, I lost an entire crop of snap peas to one animal that was about twice the size of my standard dachshund. But I decided to chill out and hope the same thing didn’t happen the next season. It’s been three years and I haven’t had a problem since.

It was great to discover Lynne Russell’s website , “Hoghaven,” and know that I was not alone. I have been linking to it practically since the inception of this blog, so I thought I would contact Lynne and get some of her thoughts on these animals, and her unusual relationship with them:

Dirtynailz:  Have you always loved groundhogs?

Lynne:  “Since my first groundhog in 1998. ‘Duchess’ took up residence under my shed and posed for pictures in return for food. At the time I was learning HTML and decided to make her the subject of my first web site, ‘Groundhogs at Hoghaven.’  The following year she returned with a litter of cubs and this further fueled my groundhog passion.”

DN: You have been observing them and living surrounded by them for years, and you seem to understand the nuances of their behavior. Are they more interesting and complex than most people think?

Lynne: “Absolutely.  I learned quite a bit from personal observation and from others with whom I’ve had contact through Hoghaven, including wildlife rehabilitators and individuals who have raised them as pets.  Some of the stories I’ve heard and pictures I’ve seen are truly amazing.”

DN:  Do you have one or two cool/funny/touching stories about your interactions with them?

Lynne: “Yes. By the second generation the cubs would recognize me and come running up to me.  They always expected food and always got it.  They would take food by hand and sniff me.  I never attempted to pick them up because they were wild.  They ate the petunias and lilies in my flowerbed, so I began planting silk flowers.  They never ate my flowers again!” 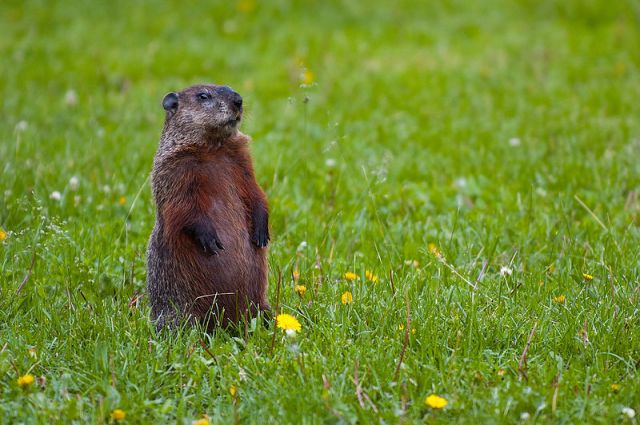 DN: Do you think it’s unfair the way groundhogs are persecuted by farmers and gardeners? Are they really as destructive as people say?

Lynne: “I think it’s a shame that people make such a fuss, especially over their gardens.  Once I fell in love with the groundhogs, the flowers and gardens seemed so unimportant.  In fact, I planted extra beans and tomatoes just for the hogs.  The joy they brought me every day of the summer overshadowed the holes in the yard.  Each winter I was anxiously awaiting their return in the spring.   Unfortunately, because of over-development, these poor creatures and many others have lost their homes.   The least we can do is to learn to live among them and put up with a few inconveniences.”

DN: What would you like people to know about them?

Lynne: “That there is no reason to fear them.  They are not dangerous to children, cats or dogs.  They run and hide from their predators. They are vegetarians, and it doesn’t take much to earn their trust, especially with treats!”

So there you have it – another perspective on an animal reviled by farmers and gardeners alike.

Thanks to Lynne Russell for standing up for these animals. Be sure to check out her quirky and interesting website.